Mail.Ru Group Limited (LSE: MAIL, hereinafter referred as "the Company" or "the Group"), one of the largest Internet companies in the high-growth Russian-speaking Internet market, today releases its annual report for 2013 and provides the following final audited segment financial information for the year ended 31 December 2013 and preliminary revenue update for Q1 2014.

Commenting on the results of the Company, Dmitry Grishin, Chairman and co-founder of Mail.Ru Group, said:

“We are very pleased to report our final IFRS audited results for 2013 in line with the preliminary announcement in February. Despite a more challenging macro environment we have started 2014 positively with a good performance in the first quarter.

In Q1 2014, the Company achieved Group aggregate segment revenue Y-o-Y growth of 24.6% with a solid contribution from all revenue streams. As previously mentioned we have now started to report our advertising revenues as a single line which is a better reflection of both the way that we manage the business, but also to eliminate the significant transfers between the display and contextual revenue lines.

In Q1 we continued to execute on our games strategy which proved successful in 2013. Warface remains an important component of this, and has seen continued traction in terms of both users and revenues – during Q1 Warface remained our largest revenue generating game. In Q1 we also released client-based MMORPG ArcheAge where, as we commented in February the initial signs are very promising. As we announced at the GDC conference in San Francisco we have further releases through the rest of 2014 and will continue to internationalize our most successful titles under the my.com brand. As such we expect the MMO games revenues to continue to show strong growth through the year.

Community IVAS revenues continued to show solid growth in Q1, growing ahead of the increase in the user base as we continue to focus on increasing paying user penetration – especially in virtual gifts and services, as well as in our API platform. We remain focused on increasing user engagement and improving our product.

We are also encouraged by the initial success of myMail which was launched in November 2013 as part of the wider my.com launch. According to Distimo myMail app became the most downloaded alternative email client on iOS in March this year and we continue to see very good growth in users.

While we have had a solid start to the year, the underlying economic, and geo-political environment has become more challenging which impacts the longer term visibility and makes forecasting more problematic. Notwithstanding this, the underlying market remains broadly supportive and the structural drivers of our business are unchanged. As a result we reiterate our full year 2014 guidance of 22-24% y-o-y revenue growth and EBITDA margins of between 53-54%.”

The Mail.Ru Group management team will host an analyst and investor conference call at 14.30 UK time (17.30 Moscow time, 09.30 U.S. Eastern Daylight Time), on Thursday 24 April 2014, to discuss details of the Company’s performance and certain forward-looking information. The conference call will include a Question and Answer session.

To participate in this conference call, please use the following access details:
Confirmation Code: 30295920

Mail.Ru Group (LSE:MAIL, listed since November 5, 2010) is a leading Internet company in the high-growth Russian-speaking Internet markets (Russia is Europe's largest Internet market measured by the number of users, comScore). Mail.Ru Group's sites reach approximately 94% of Russian Internet users on a monthly basis (comScore, December 2013) and the Company is the fifth largest Internet business globally, based on the total time spent (comScore, December 2013).

The Company holds non-controlling equity stakes in VK.com (51.99%) and Qiwi (10.42%). The Company also holds a number of small venture capital investments in various Internet companies in Russia, Ukraine and Israel.

(**) Including Other IVAS revenues

Filing of the Annual Report for 2013

The Company’s Annual Report and audited consolidated financial statements for the year ended December 31, 2013 prepared in accordance with IFRS and accompanied by an independent auditor’s report have been filed on the National Storage Mechanism appointed by the Financial Services Authority and can be accessed at http://corp.mail.ru/media/files/mail.rugrouparfy2013.pdf 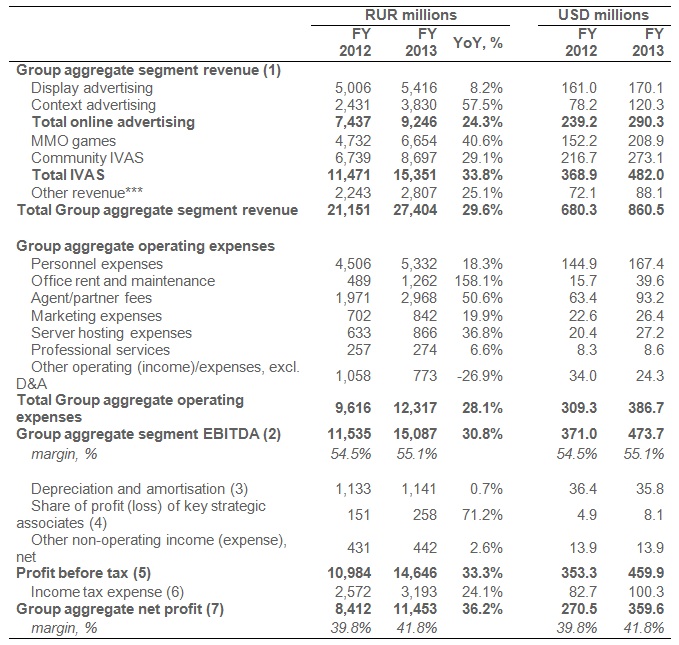 (***) Including Other IVAS revenues

We identify our operating segments based on the types of products and services we offer. We have identified the following reportable segments on this basis:

The Email, Portal and IM segment includes email, instant messaging and portal (main page and verticals). It earns almost all revenues from display and context advertising.

The Social Networks segment includes our two social networks (Odnoklassniki and My World) and earns revenues from (i) user payments for virtual gifts, (ii) revenue sharing with application developers, and (iii) online advertising, including display and context advertising.

The Online Games segment includes online gaming services, including MMO, social and mobile games. It earns almost all revenues from (i) sale of virtual in-game items to users and (ii) royalties for games licensed to third-party online game operators.

The E-Commerce, Search and Other Services segment primarily consists of search engine services earning almost all revenues from context advertising, e-commerce and online recruitment services and related display advertising. This segment also includes a variety of other services, which management considers insignificant for the purposes of performance review and resource allocation. 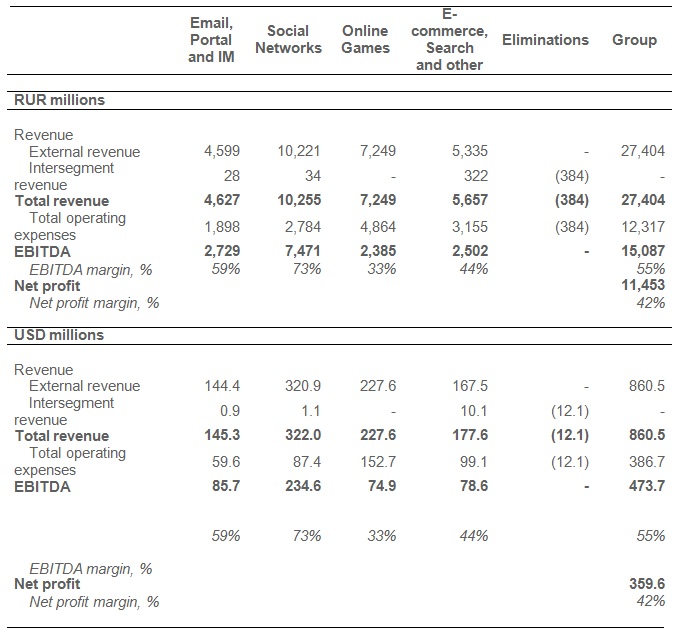 (*) The USD numbers represent a convenience translation. The RUR amounts have been translated into USD using FY 2013 average exchange rate of 31.85 RUR/USD

A reconciliation of Group aggregate segment revenue to IFRS consolidated revenue of the Company for the years ended 31 December 2013 and 2012 is presented below:

A reconciliation of Group aggregate segment EBITDA to IFRS consolidated profit before income tax expense of the Company for years ended 31 December 2013 and 2012 is presented below: 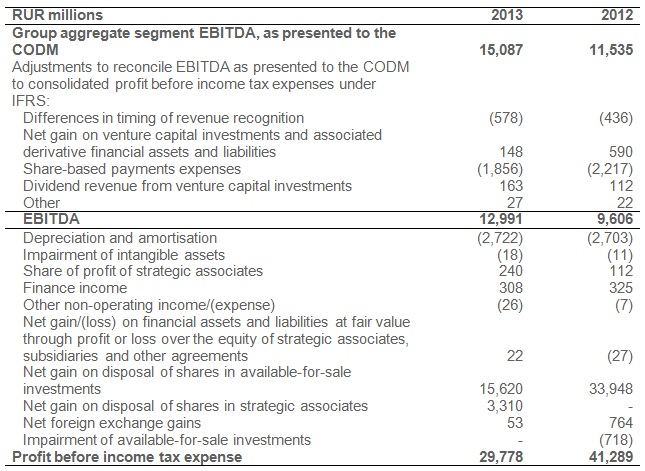 A reconciliation of Group aggregate net profit to IFRS consolidated net profit of the Company for the years ended 31 December 2013 and 2012 is presented below: 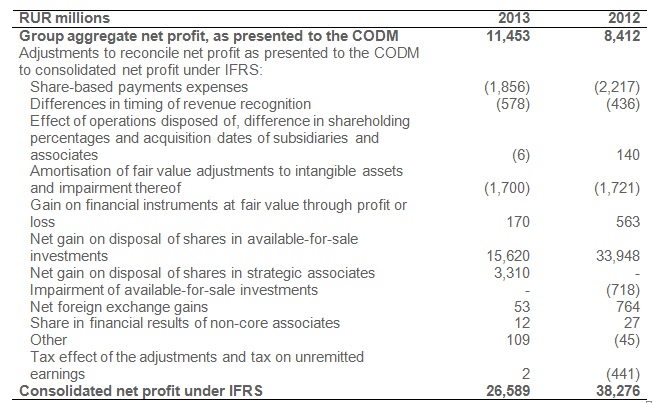 [1]The USD number represents a convenience translation. The RUR amount has been translated into USD using an exchange rate of RUR 35.6871 to USD 1.00, the official exchange rate quoted as of March 31, 2014 by the Central Bank of the Russian Federation