April 23, 2015. Mail.Ru Group Limited (LSE: MAIL, hereinafter referred as "the Company" or "the Group"), one of the largest Internet companies in the Russian-speaking Internet market, today releases its annual report for 2014 and provides the following final audited segment financial information for the year ended 31 December 2014 and preliminary revenue update for Q1 2015.

Commenting on the results of the Company, Dmitry Grishin, Chairman and CEO (Russia) of Mail.Ru Group, said:

“We are pleased to report our final IFRS audited results for 2014 which are in line with the preliminary announcement in February. Despite the continuing challenging macro and geo-political environment, which remained broadly unchanged, we have started 2015 with a solid Q1 performance. In Q1 2015, the Company achieved aggregate segment revenue growth of 7.3% Y-o-Y to RUR 9,431 million. As in the FY 2014 reported results the revenue growth rates are based on a full pro-forma consolidation of VK from the beginning of 2013.

In Q1 2015 our MMO games and community IVAS revenues remained broadly on budget, but advertising revenues, particularly in display, and our HeadHunter business continued to face difficult conditions as a result of the ongoing economic and geo-political environment. However we continue to focus on the opportunities presented by both mobile and video advertising across the entire network. We are pleased with the launch of the myTarget platform which continues the integration of VK into the wider group. In Q1 VK revenues grew 27.5% to RUR 1,286 million. As previously commented the focus for 2015 in VK will be the continued expansion of video and mobile advertising. This was started in Q4 2014 and traction continued to grow in Q1 and we are pleased with the progress. VK continues to make good progress and in January 2015 set an all time record with 5.56 m registrations.

Our other revenue stream remains sensitive to the underlying economic environment and hence saw revenues decline by 5.5% in Q1. The sale of HeadHunter did not close and the process has been terminated, and as such, we continue to operate HeadHunter as a part of the Company.

In Q1 we continued to execute on our MMO games strategy which proved successful over the last years. Warface remains our largest revenue generating game with continued strong performance and also benefited from further updates. During Q1 Skyforge successfully completed its closed beta release and has subsequently gone into full release in Russia. International release will follow later this year. Initial feedback on the game has been encouraging. The pipeline remains strong with Armored Warfare due to go into closed beta in H1 and World of Speed potentially in H2. As previously commented, we will also continue to internationalise our most successful titles under the My.com brand. Therefore we expect the MMO games revenues to show solid growth through 2015.

Community IVAS revenues showed solid growth in Q1, growing ahead of the increase in the user base as we continue to focus on increasing paying user penetration – especially in virtual gifts and services, as well as in our API platform. We remain focused on increasing user engagement and improving our product.

Our international expansion continues and we remain encouraged by the traction of myMail which continued to gain traction in Q1. The US is the largest market followed by the UK, France, Germany and Brazil. We will look to leverage the myMail user base through the international release of games later this year.

We are pleased to announce that both the board and shareholders have now approved the new long-term incentive plan based around restricted stock units. Our team remains our most valuable asset and the retention of engineering talent is key to the long term success of the Company.

We have had a solid start to the year and our engagement with users remains very strong, and user behavior remains unchanged. While we see no near term change to the underlying environment in Russia international initiatives under the my.com brand are going well, and we continue to see a number of opportunities both in VK, and in our games business. Based on current visibility and current market conditions, we are pleased to re-iterate our FY 2015 guidance of revenue growth (including both VK and HeadHunter on a pro-forma basis) to be between 7%-12% with EBITDA margins at between 46-47%.”

The management team will host an analyst and investor conference call at 09.00 UK time (11.00 Moscow time), on Thursday 23 April 2015, to discuss details of the Company’s performance and certain forward-looking information. The conference call will include a Question and Answer session.

To participate in this conference call, please use the following access details:

Mail.Ru Group (LSE:MAIL, listed since November 5, 2010) is a leading company in the Russian-speaking Internet markets (Russia is Europe's largest Internet market measured by the number of users, comScore). Mail.Ru Group's sites reach approximately 96% of Russian Internet users on a monthly basis (comScore, December 2014) and the Company is the sixth largest Internet business globally, based on the total time spent (comScore, December 2014).

The Company holds minority equity stakes in Qiwi (1.31%) and a number of small venture capital investments in various Internet companies in Russia, Ukraine and Israel.

(*) The numbers in this table and further in the document may not exactly foot or cross-foot due to rounding
(**) Including Other IVAS revenues
Note: Group aggregate segment revenue is calculated by aggregating the segment revenue of the Company's operating segments and eliminating intra-segment and inter-segment revenues. This measure differs in significant respects from IFRS consolidated net revenue. See "Presentation of Aggregate Segment Financial Information" below.

Filing of the Annual Report for 2014

The Company’s Annual Report and audited consolidated financial statements for the year ended December 31, 2014 prepared in accordance with IFRS and accompanied by an independent auditor’s report have been filed on the National Storage Mechanism appointed by the Financial Services Authority and can be accessed at https://corp.mail.ru/media/files/mail.rugrouparfy2014.pdf 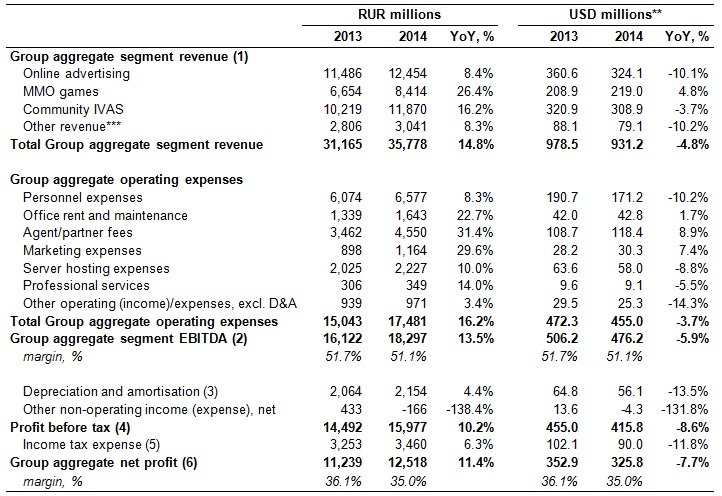 (*) The numbers in this table and further in the document may not exactly foot or cross-foot due to rounding
(**) The USD numbers for FY 2013 and FY 2014 represent a convenience translation. The RUR amounts have been translated into USD using average exchange rates for FY 2013 (31.8480 RUR/USD) and FY 2014 (38.4217 RUR/USD) respectively
(***) Including Other IVAS revenues

We identify our operating segments based on the types of products and services we offer. We have identified the following reportable segments on this basis:

The Email, Portal and IM segment includes email, instant messaging and portal (main page and verticals). It earns almost all revenues from display and context advertising.

The Social Networks (excluding VK) segment includes our two social networks (OK.RU and My World) and earns revenues from (i) user payments for virtual gifts, (ii) revenue sharing with application developers, and (iii) online advertising, including display and context advertising.

The Online Games segment includes online gaming services, including MMO, social and mobile games. It earns almost all revenues from (i) sale of virtual in-game items to users and (ii) royalties for games licensed to third-party online game operators.

The VK segment includes the Group’s social network Vkontakte (VK.com) and earns revenues from (i) commission from application developers based on the respective applications’ revenue, (ii) user payments for virtual gifts and stickers, and (iii) online advertising, including display and context advertising.

The E-Commerce, Search and Other Services segment primarily consists of search engine services earning almost all revenues from context advertising, e-commerce and online recruitment services and related display advertising. This segment also includes a variety of other services, which management considers insignificant for the purposes of performance review and resource allocation. 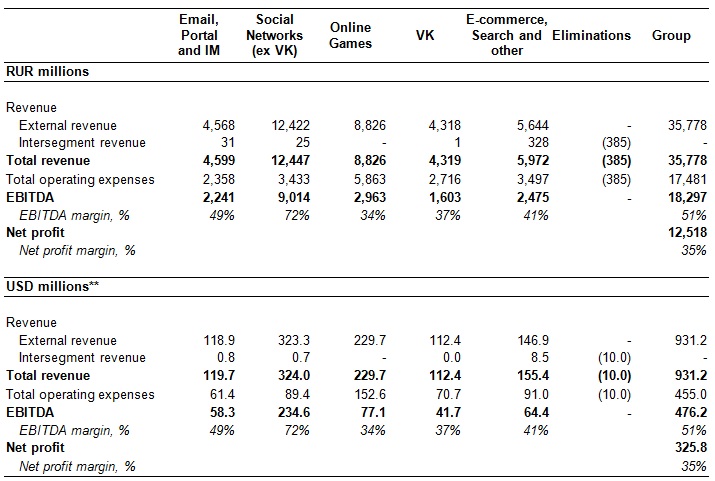 (*) The numbers in this table and further in the document may not exactly foot or cross-foot due to rounding
(**) The USD numbers represent a convenience translation. The RUR amounts have been translated into USD using FY 2014 average exchange rate of 38.4217 RUR/USD 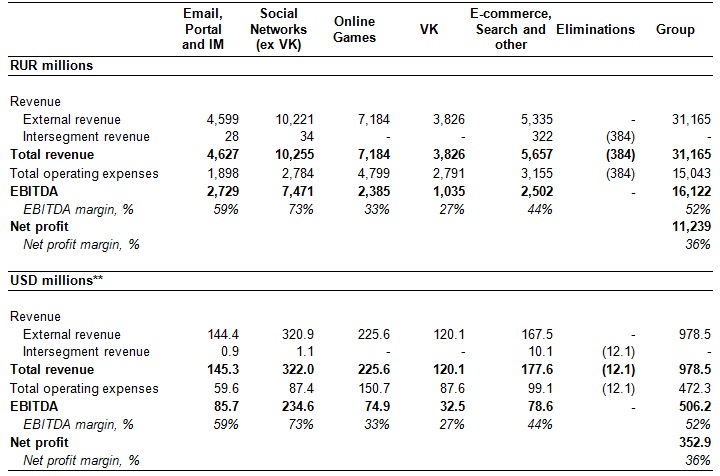 (*) The numbers in this table and further in the document may not exactly foot or cross-foot due to rounding
(**) The USD numbers represent a convenience translation. The RUR amounts have been translated into USD using FY 2013 average exchange rate of 31.8480 RUR/USD

A reconciliation of Group aggregate segment revenue to IFRS consolidated revenue of the Company for the years ended 31 December 2014 and 2013 is presented below: 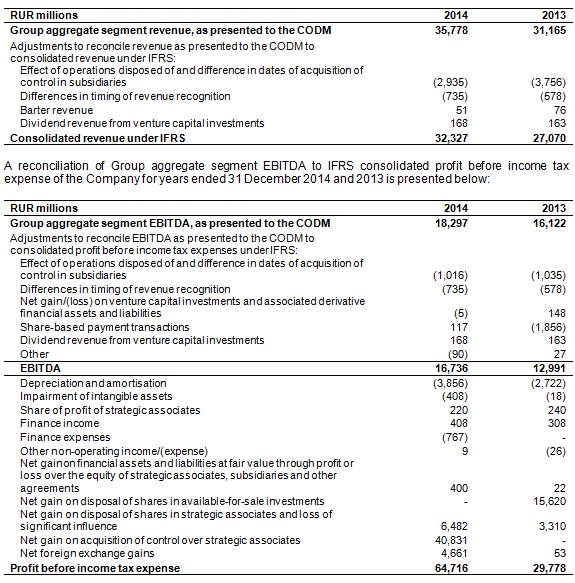 A reconciliation of Group aggregate net profit to IFRS consolidated net profit of the Company for the years ended 31 December 2014 and 2013 is presented below:

[1] The USD number represents a convenience translation. The RUR amounts have been translated into USD using an exchange rate of RUR 58.4643 to USD 1.00, the official exchange rate quoted as of March 31, 2015 by the Central Bank of the Russian Federation