My.com has become an investor in Prisma, a mobile app created by the team of Russian developers that goes viral globally and within a week after launch tops charts in 10 countries. Prisma uses deep learning techniques for image processing. Deal terms are not disclosed.

Prisma app offers image processing based on deep learning. The iOS version was launched on June 11, 2016, and became one of the most popular apps on the App Stores of ten countries including Russia, where, according to the internal data provided by the Prisma team, it reached 650,000 installs. According to App Annie, Prisma got a rating of 4.5 in the US and Russia, and 4 in Germany. The Android version is scheduled for release in July 2016.

"We are inspired by the fantastic success of this app conquering the world so rapidly with its beautifully simple idea and unprecedentedly fast technology. Prisma's team has done a great job, and we will be happy to participate in this project as an investor. Artificial intelligence and neural network will bring a lot of change in all types of media content and we are happy to support such startups. We will continue investments into this perspective trend further", says Dmitry Grishin, Chairman of the Board of Mail.Ru Group/My.Com.

"I am really happy that My.com is investing into our project. I've gained a lot of experience working for My.com. The company provides great technological grounds for new projects, it's open for dialogue and long term cooperation as an investor. My.com proves the best possible partner and investor for Prisma', says Alexey Moiseyenkov, Co-founder and CEO of Prisma.

Servers.com and Gagarin Capital Fund are also investors in the project. 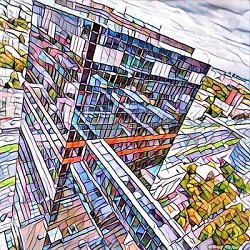